“How Can I Conduct More Meaningful Market Systems Analysis? – Check Your Ego!”

Network analysis is often cited as a useful tool for analyzing market systems. Network analysis visualizes and analyzes actors in a system and the relationships between them at a granular level. Compared to value chain analysis, network analysis provides a more detailed and nuanced understanding of relationships and social norms within a system[1]. Most valuably it can help identify root causes and leverage points in a system, and if utilized in iteration over time, can measure long-term change.  However, for project managers and MEL teams with limited time and budgets, the practicalities of mapping large unwieldy networks is often not feasible.  Not to mention the knowledge of graph theory and network mapping software required to manage a network analysis. Given these challenges, it is easy to see why network analysis has been slow to catch-on among international development practitioners. 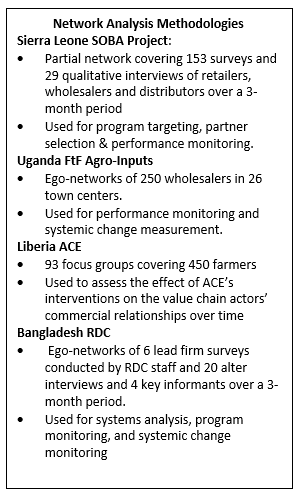 There are several use cases that have deployed network analyses successfully.  The USAID/Leveraging Economic Opportunities (LEO) project highlighted two such cases in Uganda and Sierra Leone that were able to map large trade networks that provided useful observations about the market system dynamics as well as measure performance and track systemic changes. Network analysis was also conducted in Liberia on the USAID Agriculture for Children’s Empowerment in Liberia. Most recently in Bangladesh, on the USAID-funded Rice and Diversified Crops (RDC) activity, LINC, Canopy Lab and ACDI/VOCA partnered to apply network analysis to enhance its MEL system and inform its systemic change frameworks. RDC was fortunate to engage LINC and Canopy Lab, experts in network analysis and systems mapping,  through USAID’s Global Development Lab, Strategic Program for Analyzing Complexity and Evaluating Systems (SPACES MERL) activity. The SPACES activity develops and tests tools and approaches for analyzing complex systems and improving intervention performance, making for an excellent fit.

RDC and LINC staff started with several planning discussions to determine the needs of the project and where network analysis could add the most value. RDC envisioned using network analysis as a tool for measuring systemic change on the project, by developing an initial baseline network map of southern Bangladesh. It was clear, however, that this was not going to be realistic given RDC’s large system boundary. The team agreed on an ego-network approach, that would map the first-degree networks of RDC’s lead firm grantees. These lead firms comprised of large input companies (seed and crop protection) that were piloting inclusive business models under RDC’s grant fund.  This was to be followed by a more in-depth qualitative investigation into areas of inquiry identified through the network maps. A unique part of the approach was to train RDC staff in network analysis mapping in order to institutionalize it within the MEL system, thereby building a larger number of ego-networks over the life of the project. Despite only mapping a small number of ego-networks, the analysis has provided a number of useful observations that have helped the project develop a stronger overall systemic change framework.

In addition to establishing a baseline, the network analysis and accompanying qualitative work uncovered strategic insights related to structural network dynamics and social norms in the system. Additionally, it assisted the project to identify several promising leverage points.

The analysis went further to identify and explain some promising leverage points, revealing that the supply and distribution channels of lead firms are predominantly narrow, and businesses largely engage in extractive strategies. As a result, the analysis recommended five potential leverage points that the RDC project may address to promote this shift, illustrated in the graphic below and explained further in our final report.

Ego-networks Fit with A Lead Firm Approach – Mapping an entire market system is hardly ever feasible, unless targeting a particularly narrow geography or set of value chain actors. Using an egonet approach is therefore a good starting point for network analysis and is manageable from both a time and resource standpoint.  Mapping first degree levels of key market actors, such as lead firms, is useful in collecting important insights about the structure and relationships and norms within a market system.

Qualitative Interviews Enhance Network Analysis – Armed with preliminary quantitative egonet results, qualitative analysis probes gaps, including interviews with many of the actors (i.e. alters) named by the lead firms themselves. This explanatory data helped to inform several of the strategic insights and leverage points found in our report.

Expanded Utility of Network Analysis – The original objective was to measure networks pre and post intervention to determine larger structural or relational changes in the system. However, during the qualitative portion of the analysis, the Canopy Lab researcher co-constructed egonet maps together with lead firms and alters during focus group discussions. This suggested the expanded utility of network analysis for not only analyzing market systems at a point in time, but also for visioning changes of system networks with lead firms as part of the intervention design process. Given the ease of conducting ego-nets, network analysis can also be done iteratively throughout an intervention to enhance learning and adaptation. RDC plans to use network mapping to inform its quarterly and annual portfolio reviews.

Institutionalizing Network Analysis – RDC’s MEL team was very interested in incorporating network analysis as part of their MEL plan. The team received an initial training from LINC experts and is continuing to receive remote support as it conducts additional ego-networks across new lead firm partners. This continued relationship has worked well, not only to transfer the network maps over to the projects database system, but to help the team become more skilled with analysis. This stronger understanding of the analytical lenses will enable staff to design and administer large or small investigative studies to make sense of, for example, shifts or points of interest in the quantitative data.

This article is co-authored by Patrick Sommerville (LINC) and Hayden Aaronson (ACDI/VOCA). 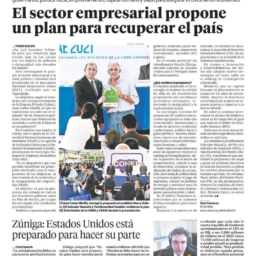 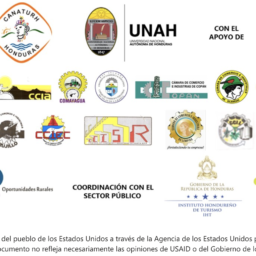