As part of our Global Development Lab and PPL funded SPACES MERL project, LINC, in partnership with the Global Obesity Prevention Center (GOPC) at John Hopkins University, facilitated a two-day systems mapping workshop for the USAID/Guatemala’s Democracy and Governance Office (DGO) in Guatemala City. The workshop came at the end of the data collection for a political economy analysis (PEA) commissioned by the DGO team to better understand the forces that influence Guatemala’s governance system. Intended to supplement the PEA, the workshop exposed the DGO team to complex systems thinking and guided them to develop a causal loop diagram to visualize their understanding of the processes and incentives that drive success (and failure) of public service delivery in Guatemala. 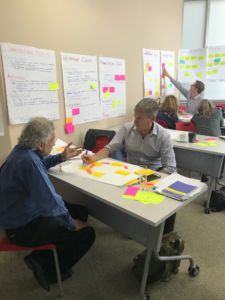 While we have long suspected the complimentary nature of PEA and systems visualization tools, we were at last able to put it to the test in Guatemala. While a PEA uncovers the foundational structures and drivers of the resulting behavior in the system, systems visualizations encourage us to step back and understand how those issues relate to one another in a more holistic manner. The participatory workshop in Guatemala allowed DGO to visualize the feedback loops and nuanced interrelationships among the foundational factors. Considering that interactions between factors have wide-ranging effects that are often difficult to predict, systems thinking permits us to see beyond the tip of the iceberg – beyond the direct cause of the results we see. It encourages us to probe the underlying factors and effects and examine issues more thoroughly, noting that factors affect each other, often in unexpected ways. Together, PEA and systems thinking create a deeper understanding not only of the structural factors, but also an appreciation of the complex interaction between the different dynamic forces at play and the potential leverage points for intervention.

In the case of Guatemala, through a literature review and a series of interviews with key stakeholders, the PEA unearthed the critical foundation factors that affect the Guatemalan government’s ability to deliver public goods to its citizens. Following a day of results of the data collection (the PEA “triangulation day”), the LINC team lead a 2-day mapping workshop to visually capture the knowledge of the local experts and DGO team members involved in the PEA. In this short amount of time, the participants were able to create an initial “messy map” of the underlying enabling and inhibiting factors and feedback loops influencing the Guatemalan government’s delivery of public goods to its citizens, and then to identify potential high-leverage intervention points in the system. The system dynamics were visualized using the online mapping platform Kumu, on which LINC had previously trained several of the DGO team members. The systems map will be integrated into the PEA report to highlight the findings and recommendations and will also be a dynamic tool that the DGO team will continue to update and use in their decision-making.

Working with the DGO team to map Guatemala’s governance system helped underline not only how well key PEA forces feed into system mapping, but also how system mapping feeds into the PEA to highlight leverage points. Together the two approaches present a powerful way to understand complex problems and may improve coordination among stakeholders working to address those problems. By combining PEA approaches with systems mapping, one sees beyond the tip of the iceberg and begins to think through the less tangible and visible forces impacting the system. This in turn may allow for leverage points to be identified that focus on addressing more than just the surface level symptoms and rather on producing long term, structural solutions.